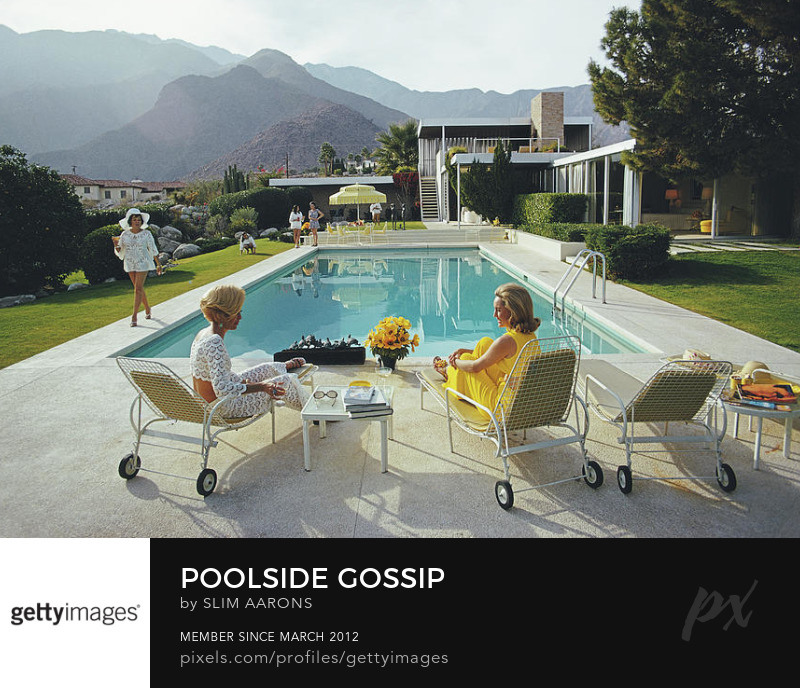 I wore yellow because Jane hates the color. That’s just the kind of mood I’m in today. Shitty.

And, yes, Dawn is en route with him. She’s no doubt packed her satin disco dress and hot pants, clueless to fashion rules in coast side Italy. She’ll be doing her own type of pawning, or pawing playing the leading lady role in Carl’s script turned reality I have no doubt.

It’s hard to keep up pleasantries when life is so predictable. A husband who cheats with his assistant and a circle of friends more interested in my Hollywood connections, access to men and sex than anything I have to say. Many envy my circumstances, yet they clearly can’t see beyond the shimmering turquoise pool and designer home.

Our Palm Springs getaway pad was supposed to be just that. Our marriage counselor recommended Carl and I spend quality time together following my stint at Betty Ford just down the road. The ‘blackout years’ as I call them were an ugly time. Running away from my secretarial New York City existence to the highlife in the Hollywood Hills was not planned. My family begged me not to follow the handsome writer across the country. Not only was the 20 year age span concerning but the sleazy circumstances of our “chance meeting” felt all too rehearsed in my parents opinion.

Doe-eyed yet seeing opportunity for advancement in society, I latched on to Carl’s ticket to Hollywood knowing this was meant to be. I wasn’t naive to think I was in love, after all I was a New Yorker. I did know, though, this was the dream so many seek and I wasn’t going to let it pass me by.

There’s no denying that money has its advantages despite the many stories having been told and songs sung, I did believe that love would become part of the package as well. Perhaps not with Carl, but with money I was confident I could easily find that person to share my life with. As it stands now, the songs are true, money can’t buy you love.

I shield my eyes from the glare my yellow pantsuit reflects in the blazing Palm Springs sun and squint at Jane, contemplating whether or not to let go of my mood and open up. Jane has heard my story many times and frankly doesn’t give a damn. She’s just here for her own ticket, the one I regret using years ago.

This story is inspired by Slim Aarons’s photograph “Poolside Gossip.”

On Location: Vancouver – An Urban City Surrounded by Nature Part 1

Get inspired by the world around you and come join me in learning how to add creativity and art to your everyday!

Get creativity in your inbox every month!

My impression of our local Friday marché. I am so

Another day of sketch walking in Paris… this cit

Mornings in Paris… ☕️🥐🇫🇷 I have se

A little tour of Parc des Buttes-Chaumont in the 1

Jules Chéret was born in Paris and lived from 183

The sketching of Paris has started! We spent the m

I've been quiet again over here as I've been spend

Bye bye Karl the Fog and hello to MKE via Chicago

Who's up for a little Creative Wanderlust Open Hou

I just shared some BIG NEWS in my newsletter today

Another day, another walk in the burbs. Being a ci

For over 30 years I’ve had a fascination with ca

Sketching the scene from the dock with my fav blac

And the irony is I’m actually having a productiv

Let's get creative inspiration from the sun! Here

Does the sun give you creative energy? I can defin